I came across a parmetric model for a mouth piece on Thingiverse. I love parametric models you can tweak it easily to get it just right. 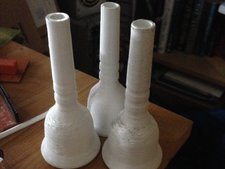 The Amersham band been getting kids into brass intruments and I though that if you could print any type of mouthpiece then they could give them away to get kids buzzing on them. Out of interest I had a look at the cost of moupieces on the web... WOW there expencive. Not too suprieing when you thing that they are custom machined lumps of metal but not being too musical (family is I droped out) I have never brought one.

So plastics ones. Turns out it has been done, which really helps as I was concirned about how safe plastics are next to a mouth. The standard plastics for FDM 3dprinters are ABS and PLA.

ABS is used alot in products so it's slightly safe, but whats it's like next to a mouth? Cheaking out a material datasheet they do have a small warning for contact with skin, not sure why but I don't want to take that risk. Also ever smelt ABS powerder, DON'T it's horiable and proberly not good for you.

Next, PLA. Made from cornstach so can't be that bad right? Well it does degrade over time, and the degridation is acellrated by water. So even if it is safe it may not be there for that long.

So then what do I use?

Well as I said there are plastic mouth pieces out there so what do they use? Lexan. Which is a trademark name. So it's real name is Polycarbonate (PC). Yeah a safe material should be able to do somthing with it. turns out it is printable and you can get filament. Was going to try it but then.

Came across it when getting some PLA/PHA, somthing new it looked just right . Designed for 3dprinters and FDA contact complient! Bingo.

Was straight on there and order some.

So thats the material done onto the printing. Had to mod the part to the right dimention. Well ok there has to be a standard for mouthpiece right? NOPE. It's crazzy people just come up with a size and thats it. There is some small amount of info about cup sizes and shape and stuff. but so un usefull.

Not to worry as I said the rest of my famaily do music so have mouthpieces I'll just mesure them. Much easier.

Now to printing, didn't have to the XT yet so plain old ABS for the moment (shouldn't kill me).

Got an ABS print out, had to wind back the extrusion mutilier loads. It was pumping out too much plastic so the layers where to thick, then the second extruder clipped the side of the print and ripped it of the bed. Not pritty. After getting a good one I gave it ago and I made some noise! Not to surpising but cool. Now to try it in XT.

The XT turned up. Time to get printing again.

Got one out the over hang at the bottom of the cup is nasty but worked. Different filament this have to heat it to at lest 250°C to push it though the extruder. Then it gets quite gooy. Still some playing needed there. 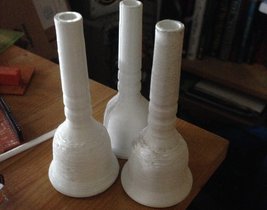 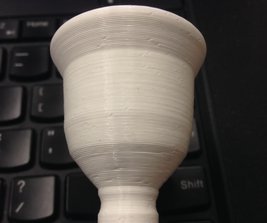 I had a bit of time off this project to do other stuff and as Makerware was annoying me.

But good news! I no longer use Makerware, yes it has a nice GUI but it's hard to predict how it's going to slice. When it works it great but it's getting it to work. So the good news I use slic3r. And it is so nice to use. Figuring out how to use it with a FlashFouge running SailFish was tricky. Turns out they down takes gCode. But using replicatorG (I Used the latest SailFish version) you can take in gCode from slicer and make .x3g files. Also you can do time estimates which is handy.

To the mouth pieces, I did a print with silc3r and strangely it worked first time (only some minor stupidity form me) and what really shocked my is it printed the first step perfectly! (pic to right)

Now I think I need to make a database converting standard sizes like the Bach sizes. I have been measuring the mouth piece and duplicating that, because the data I have found on the web is really bad. Most of the sizes are described as round, deep, shallow, sharp... What are you suppose to do with that? I'm guessing because this could be secret stuff that they don't want anyone else using? That’s defiantly not my style, If anyone out there wants to help make a open source mouth piece scale I'm in! Let me know on twitter or the contact page.

Below is are the variable I use with comments. What would be importent to a player? Also these are some times called something else:

// [Trumpet:8, Trombone:16] Shallower cups greatly assist playing in high ranges but do so at the cost of fullness of tone. Deeper cups assist low range flexibility and rich tone.

// [Trumpet:6 Trombone:8] Wider rim widths reduce the pressure on the lips, allowing greater stamina. It does, however, reduce flexibility.

Working on the open formate for mouth piece. Lets see if I can keep this up. First thing is to work out that other people do, as I have said I'm not musical I'm an engineer. So I looked at the vars I used above most should work, some like length need a bit of tweeking.