My Dad use to be a telephone engineer for BT, working on the strowger telephone exchange.

He still loves then are has some old exchanges that he is restoring. Looking at the strowger switch it's just an amazing piece of engineering and the sound it makes it sweet. So I decided to make one as they are quite hard to get hold of and I don't want to break one playing around with it. So why not laser cut one? I am also working on a arduino controlled version and it would be cool to have some uni's to spin for that too.

Make a few sketchs of the make conponent. The ratchit the moves the switch round, theres no way I can make it at the persision that the originals are make. So I need to make the main sproket bigger.

For this project I am using LibreCad. We use 2d cad alot at work and I need to teach myself to thing that way (too much 3d modeling).

So the main sproket has 50 teeth (I think 25 contacts that have 2 wipers). Kinda guess a size about 80mm dia. Looks ok so put some teeth on it 360°/50=7.2° between teeth. Teeth are 3mm deep but may have to be deeper. I was think the whole time though drawing this of what could go wrong and what do I need to fix now, basicly I panic I would get it wrong. I wasn't till I went to the Elephant and Castle Mini Maker Faire and saw the Just add sharks guys again that I got excited and just went for it. who care if it's wrong I will fine out later. 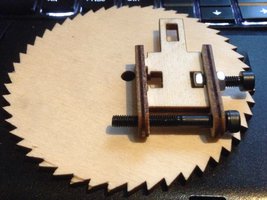 Turns out it almost worked! Would have not guessed that, playing with it in my hand I can get it to pull the wheel round. Need some mod to make it better but not as bad as I though (Seams I should stop worring as much).

Need to length the neak and enlarge the whole that catches the wheel. Then onto the lever for the electromagnet.

So back to the drawing board to make that.

So I kind of mucked up the design again.

Yep not going too well, I sort of had it working but the wheel kept woberling all over the place. I need a suport on the other side so tried to add that in. and well I forgot about bolt heads again. It's this working in 2d I'm having problems with. I don't check it see if there will be any problem with it fitting from other angles. Plus if I update one angle then the others don't update. It's going to be a learning curve. 3d cad stuff for linux isn't that great I tried freecad but found that harder. BricsCAD looks good but spent the 30 trial getting the graphics card to work (which didn't). But hey I'll get there will ust take time.